This subforum is for discussion of the Iron Falcon Rules for Classic Fantasy Role-Playing. Maybe someday they'll have their own forum, but for now I'm keeping the discussion here.
Post Reply
35 posts

Yes, that's right. Today I'm releasing two new books on Amazon.com and Lulu.com! Let me tell you about them:

The Iron Falcon Handbook of Monsters 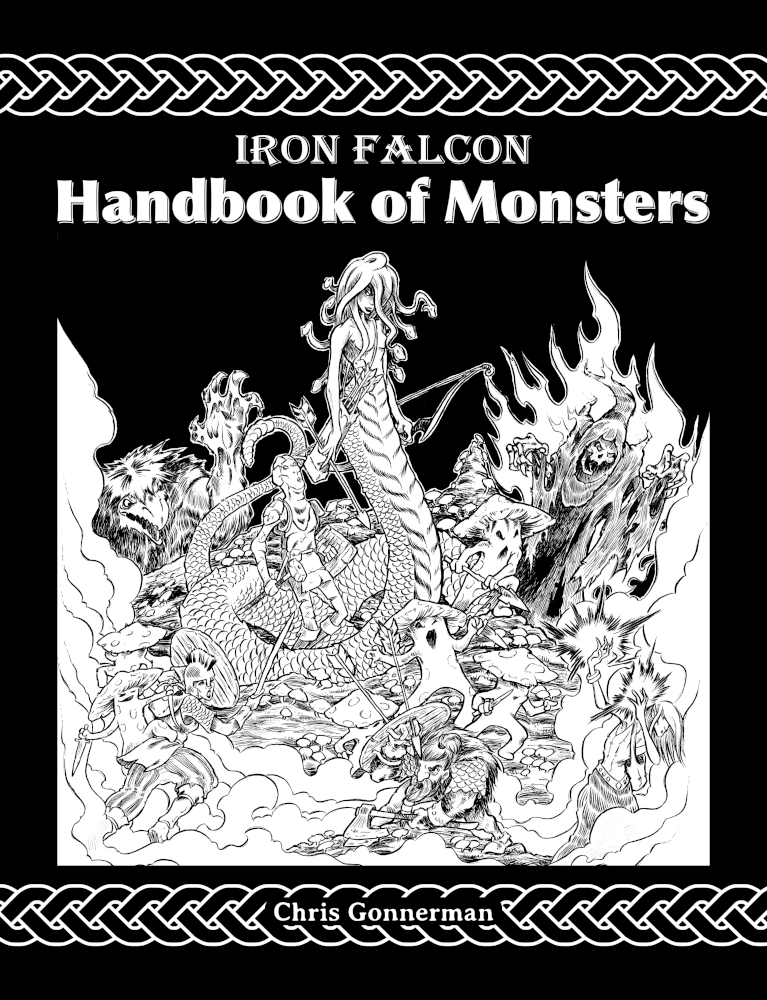 From the back cover:

Some of our monsters are missing...

The Iron Falcon Rules for Classic Fantasy Role-Playing represent the role-playing rules and style of the early days of role-playing. One of the side effects of choosing that era is that many classic monsters are simply missing, as they had not been invented yet! But what if you have an adventure written for a slightly later era, or perhaps an Old School Renaissance adventure module designed in the classic style? Finding Iron Falcon-compatible statistics for classic monsters can be a challenge.

There must be a solution.

This book is it. The Iron Falcon Handbook of Monsters combines the original core rulebook creatures with the full list of monsters found in the Basic Fantasy Role-Playing Game, along with many additional monsters by the author and contributors. These new monsters have been made fully compatible with the Iron Falcon rules. Some of the existing monsters from the Iron Falcon rulebook have been carefully revised, with attention paid to retaining their style and flavor.

The goal of all of this is simple: The Iron Falcon Handbook of Monsters aims to be the go-to resource for anyone running RPG campaigns using 0e-era games, whether classic or retroclone, providing all the monsters needed to run classic adventures as well as more modern adventures written in the classic style. You are invited to judge the results for yourself. 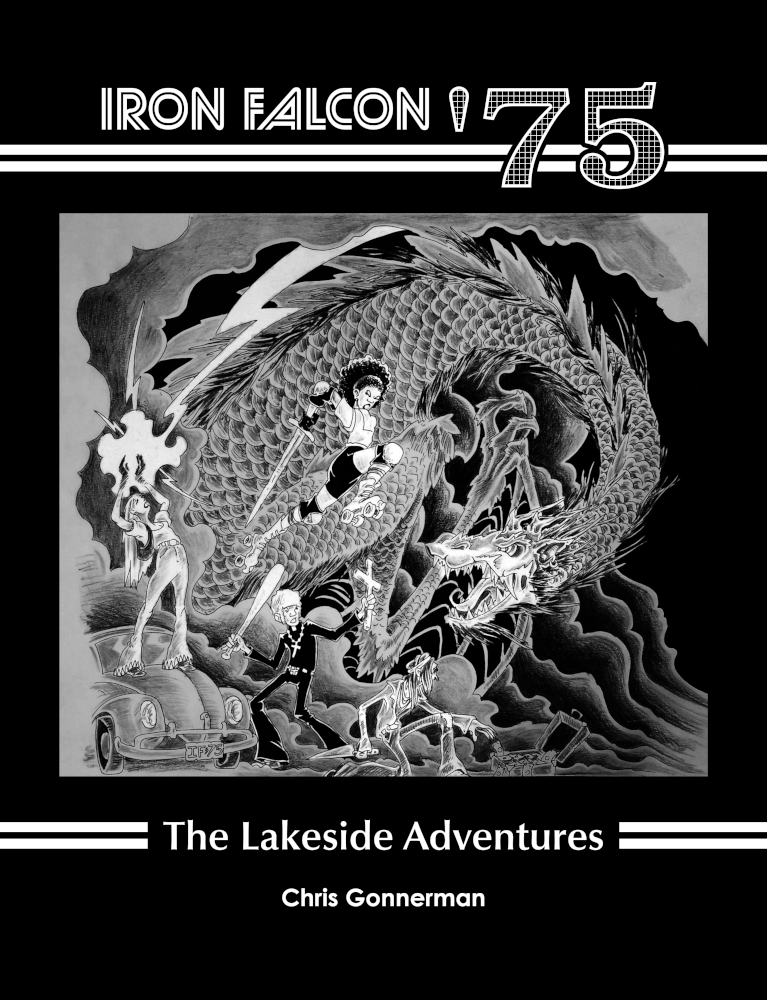 From the back cover:

What if magic was real?

What if, long ago, monsters walked the Earth... ogres, giants, dragons, and vampires, and the smaller, scarier things that haunt the darkness? What if heroes and wizards did battle against them, in defense of humankind?

What if the magic went away?

What if it all just faded into the shadows? What if all the monsters and magic became nothing more than myths or superstitions, remembered by few and believed by even fewer.

What if it all came back?

What if monsters once again stalked the night, slipping out of the shadows to slay the unsuspecting and the skeptical? And what if a few people knew, and went out to fight against them?

In this game, players will take on the roles of modern-day people of the year 1975. No one but a crackpot would believe in magic, or giants or dragons or any of that nonsense. Yet your player characters will enter this world of magic and mayhem, willingly or otherwise, and do battle with monsters they once thought were just myths!

This book includes background materials, supplementary and optional rules, and three adventures to get your campaign started. You will also need a copy of the Iron Falcon Rules for Classic Fantasy Role-Playing in order to use this book.

The time has come to face what lurks in the shadows...


Links to the Amazon.com and Lulu.com pages for these books can be found here:
http://ironfalconrpg.com/getit.html
My personal site: www.gonnerman.org
Top

Best of luck with both of these, Solo. Glad I was able to contribute in even a small way.
Teaman is the sole proprietor of Sharp Mountain Games at roll20 and DTRPG

I appreciated you coming through this week. I had public domain art for every other odd sort of coin, but for the purely fictional coin I needed a fictional drawing. Much appreciated!
My personal site: www.gonnerman.org
Top

Solomoriah wrote: ↑Fri Nov 25, 2022 9:42 pm I appreciated you coming through this week. I had public domain art for every other odd sort of coin, but for the purely fictional coin I needed a fictional drawing. Much appreciated!

Most welcome.
Teaman is the sole proprietor of Sharp Mountain Games at roll20 and DTRPG

I think these will be fun to run several sessions with.
Top

I am super thrilled because most fans of the game don't realize that Solo conjured up several things in one day. Not only is there a release of the long awaited monster book and a new adventure book, but from what I can see of the preview - the adventure book has several Iron Falcon house rules that could be used in the original "medieval" setting such as brawling rules, along with how to run a modern 1975 setting and adventures. But that's not all! No one announced small but significant fixes that were done to the core Iron Falcon rule set (now v56). Chris, thanks for tolerating me on the later book. I'm glad my editing help was ultimately useful...

And now.... Is anyone starting a PbP game? Sorry I'm in Japan. It's easiest that way for me...
Top

This is awesome news! As an art contributor on the handbook of monsters, I’m super excited to get my hands on the book. It’s being delivered on Tuesday.

But this Lakeside one caught me by surprise. I shared this announcement on the OSR group on Facebook and people there seem very keen on this one.

Ordered the Iron Falcon ‘75 as soon as I learned of it’s existence, and it arrived today. Obviously, I haven’t played it yet, but it looks like a hoot. I love how you made it flexible enough to it be both a portal fantasy and a magic and monsters exist in the real world game.

There are so many cool directions this could be taken. Might be fun to play an adventure based on the paranoia of the Satanic Panic: what if the local college students really were battling monsters in the steam tunnels below the university? Or a version of the old D&D cartoon show. (OK, maybe not that…)

The included adventures look great, too. Mostly, I just wanted to say well done and looking forward to trying it out.
Top

YYZombraire wrote: ↑Sun Dec 04, 2022 6:00 pmMight be fun to play an adventure based on the paranoia of the Satanic Panic: what if the local college students really were battling monsters in the steam tunnels below the university?

Oh, my gawd. What an idea!
My personal site: www.gonnerman.org
Top

YYZombraire wrote: ↑Sun Dec 04, 2022 6:00 pm There are so many cool directions this could be taken. Might be fun to play an adventure based on the paranoia of the Satanic Panic: what if the local college students really were battling monsters in the steam tunnels below the university?

this is possibly the single best most wonderful adventure idea I've ever seen
No matter where you go...there you are
Top
Post Reply
35 posts

Users browsing this forum: No registered users and 2 guests